The Fez Festival of World Sacred Music is one of the main events of the Spirit of Fes Foundation. It is part of his calling to the arts and spirituality at the service of human and social development and reconciliation among peoples and cultures.

The Fes Festival runs through the vast spaces of songs and rhythms that the world’s cultures have created since the dawn of time. 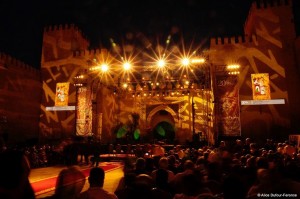 The Festival of Sufi Culture

In its “Muqaddima” (Prolegomena) Ibn Khaldun described Sufism as a science hearts, or more precisely, knowledge of the “inner states”.
Ibn Khaldun include:“… Meditation is like food that gives growth in mind: it does not cease to grow until it was science, it becomes” presence “, and the sails of the senses rose up, the soul enjoys the fullness of faculties belonging to it by virtue of its essence … ”

When conversely we are heading towards the depletion of this spiritual dimension, this results empty the religious sense of its true substance and substitute a social and political ideology that distances him or her astray the finality. 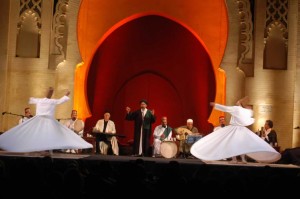 The spiritual dimension when there is, by cons, no conflict with other dimensions of art, culture, thought or society that can irrigate and nourish. This is what we wanted to emphasize in this seventh edition of the Fez Festival of Sufi Culture showing how these two dimensions, external (Zahir) and inner (Batin) not only complement but allow to consider a new source inspiration and creativity in all areas that constitute our human culture. They can also be complementary in this founding of a living civilization capable of constantly renewing forever serve the same purpose: to make human destiny path of spiritual fulfillment.

Sufism is a way of teaching and “path” spiritual which is at the heart of the tradition of Islam. This pathway is also an expression of culture and, one might say, the spirit of its civilization. In this sense, Sufism is primarily a spiritual experience, “dhawq” or a personal flavor, was then throughout history, continuing source of creativity, intellectual, poetic, literary, artistic (especially in music) and, even more broadly, although not sufficiently explored, the source of societal productivity rich and remarkable.